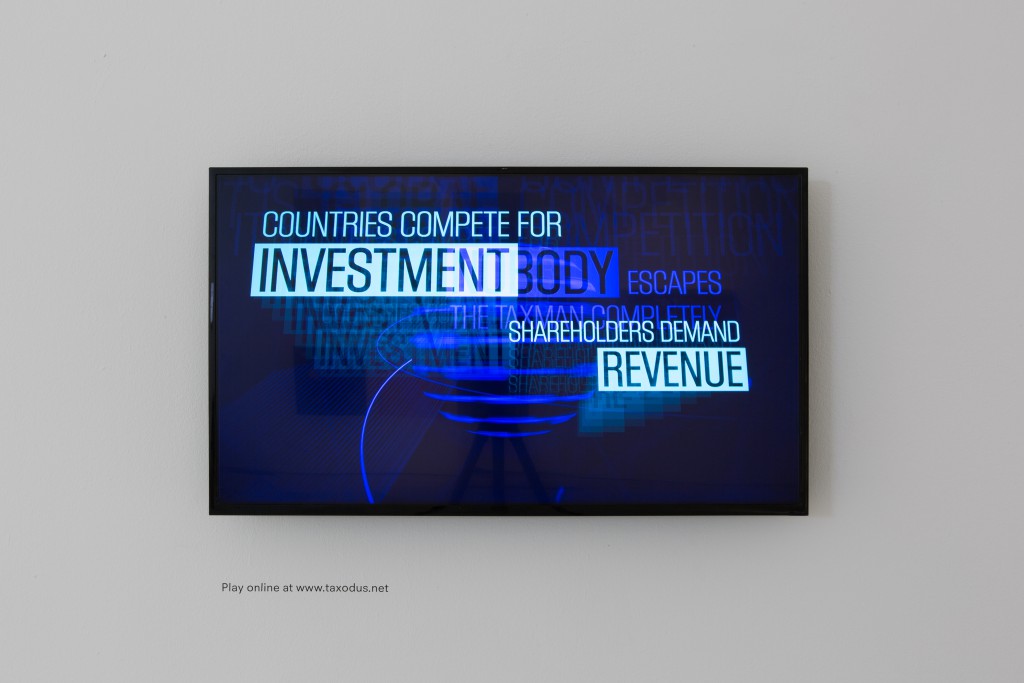 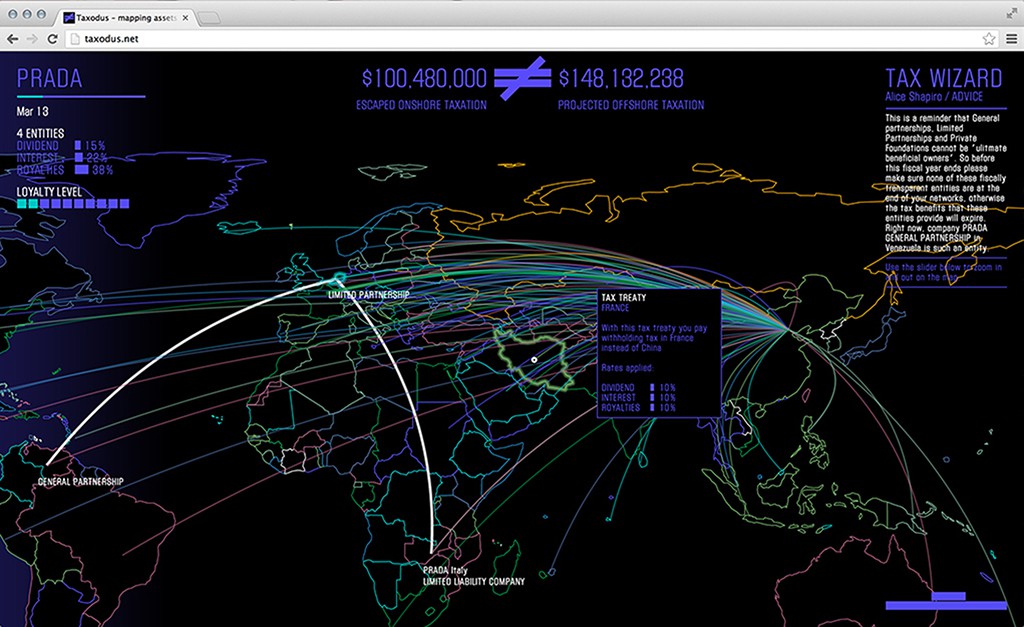 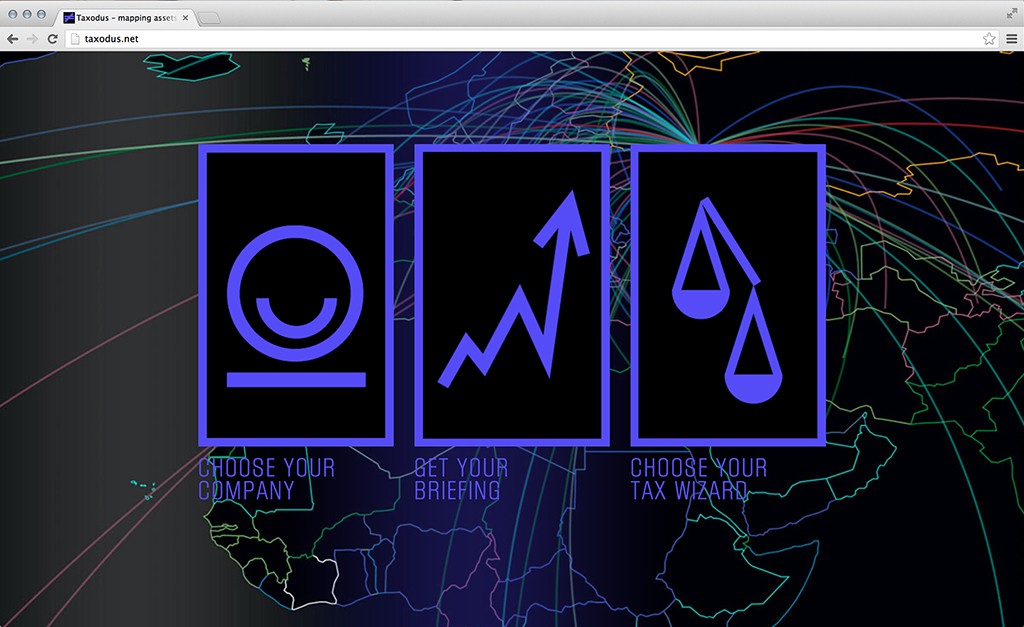 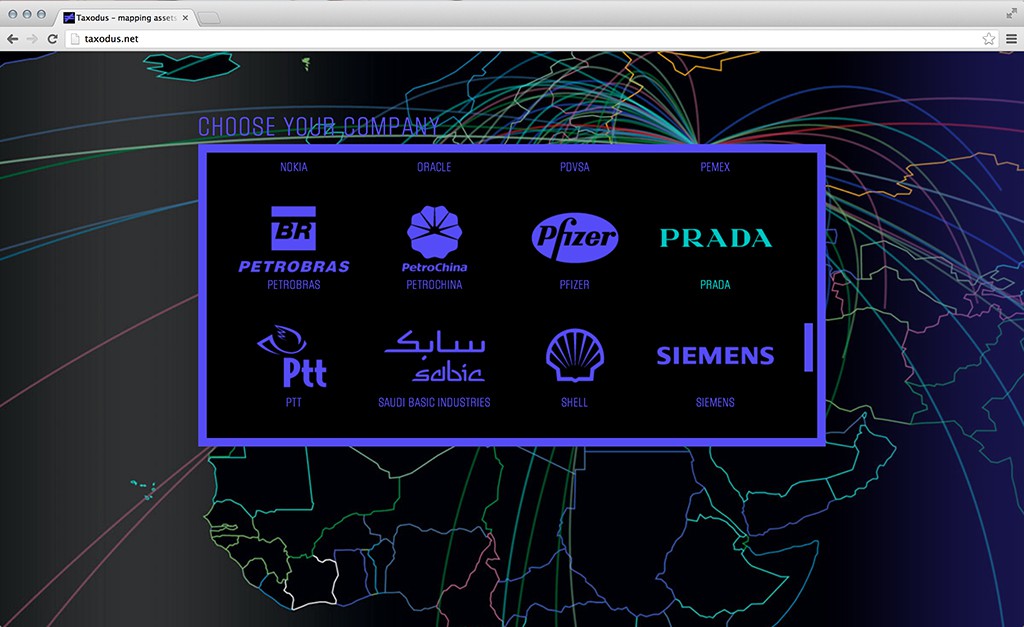 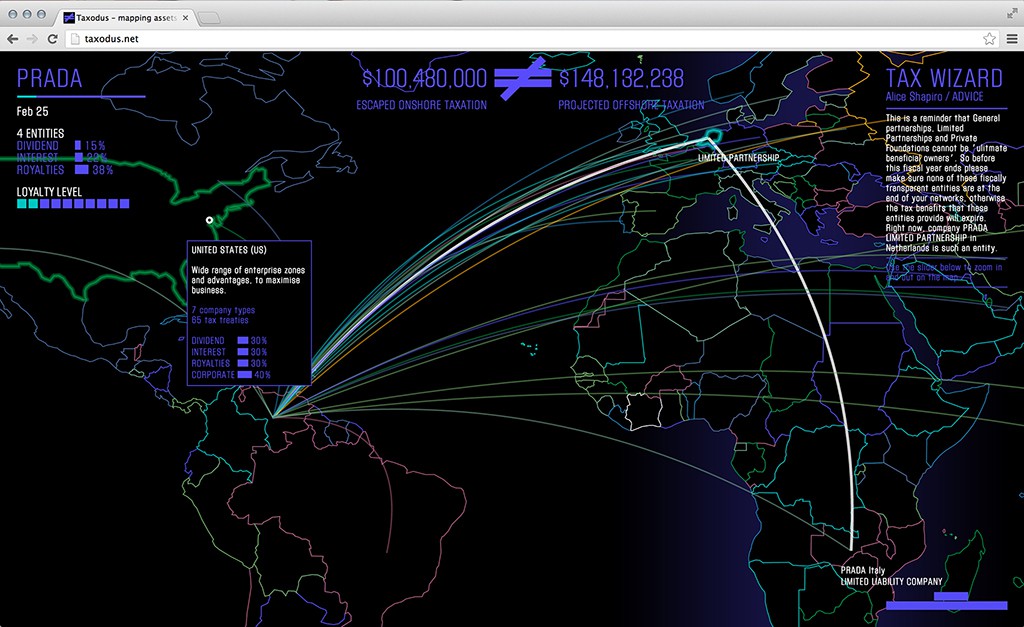 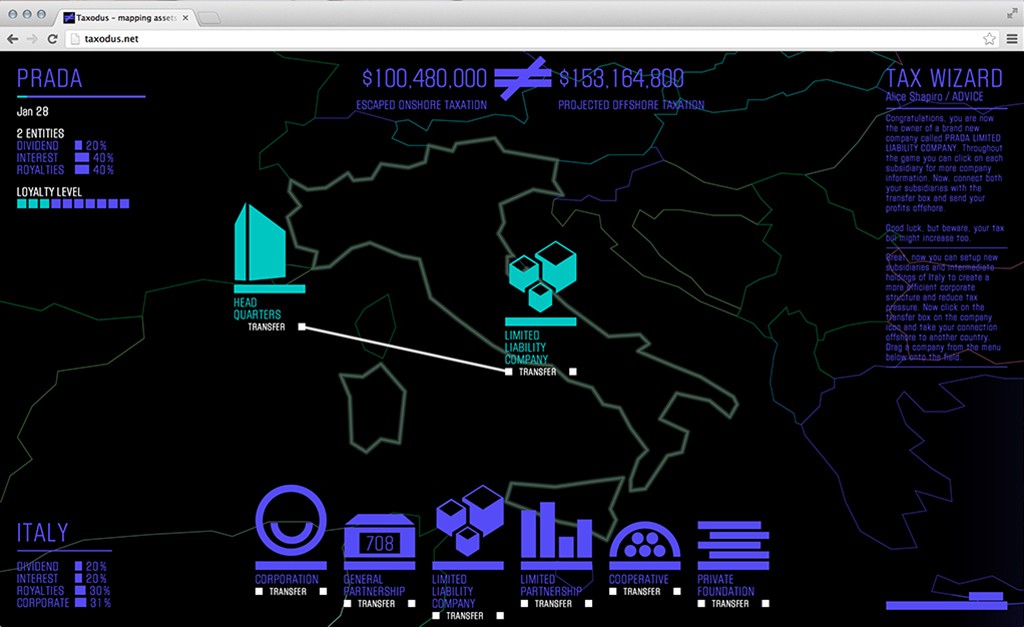 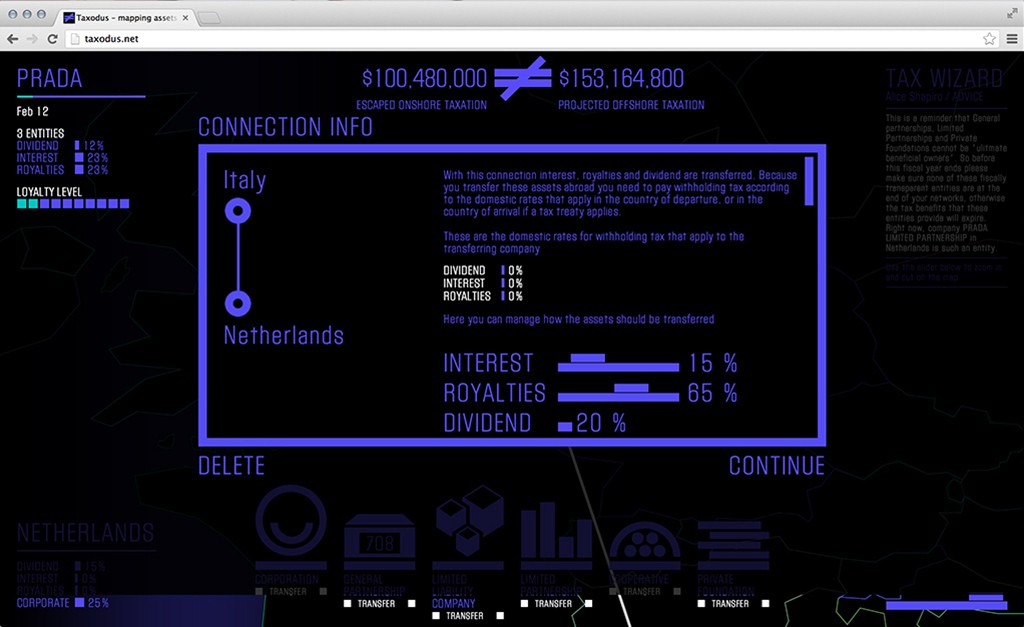 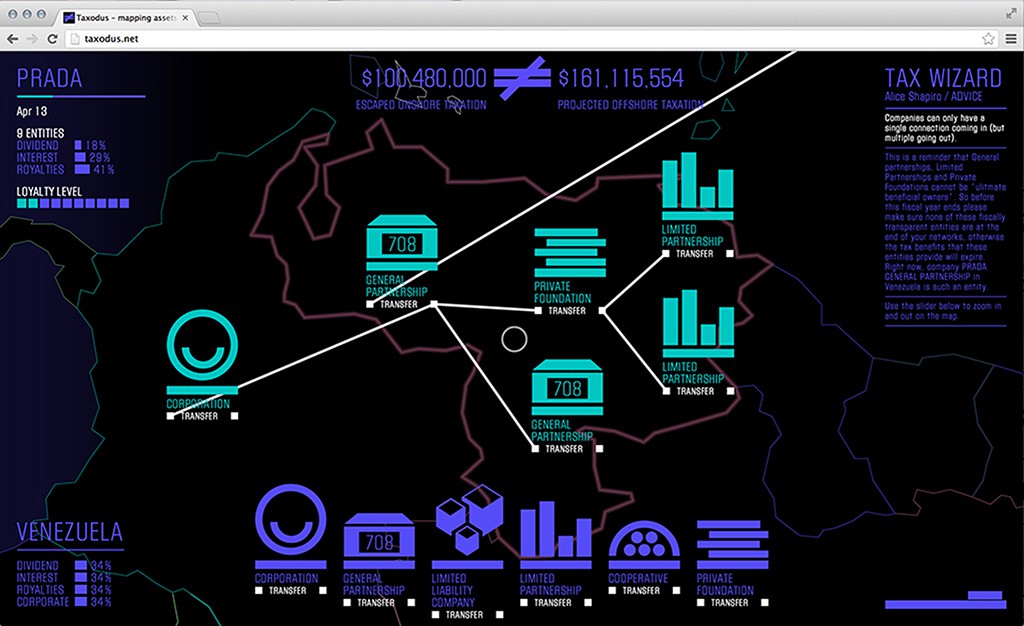 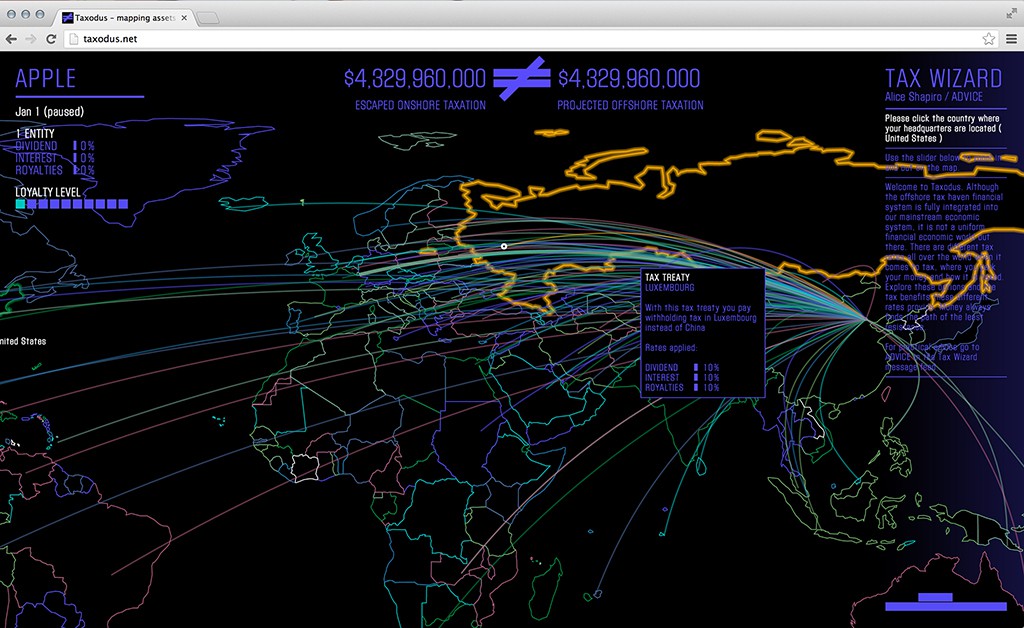 Even today tax havens recall the image of tropical islands with bank secrecy where celebrities and mafiosi park their money. Yet, offshore financial centres have long ceased being an ‘exotic side show’ to the global economy – now they are its very core. It is wealthy OECD countries in particular that play a major role in this offshore economy and offer multinationals numerous opportunities to evade financial regulation legally. In this global competition for investment nation states lower their corporate taxes more and more, after all, capital flows always choose the path of the least resistance. What are those paths today?

Taxodus is a serious, web-based game that responds to the industry of tax planning by which multinationals attempt to lower their taxes on profits and other mandatory contributions as much as possible. Players, ‘acting’ on behalf of multinationals, have to dodge paying as much tax as they can within a strategic landscape that incorporates real data on international capital flows such as withholding taxes and tax treaties. By setting up subsidiaries and intermediate holdings globally, players reveal potential routes through which multinationals can ‘neutralise’ their tax burdens. These player-generated tax routes are uploaded as a fiscal annual report and are accessible in a public database.

Today, tax avoidance is no longer an exception but the norm. It has created a powerful financial shadow world into which capital flows are pumped to legally circumvent financial regulation. And while many governments lose tax revenues year after year, large capital sums are accumulating in offshore jurisdictions out of sight of the ‘tax man’. Taxodus aims at making the basic principles, geography and impact of the hidden offshore economy visible.

–––
Supported by Stimuleringsfonds Nederlandse Culturele Mediaproducties and the Mondriaan Fund